The Indian Psychiatric Society, Assam State branch is going to organize its 25th annual conference in the city on July 21 and 22.

Officials told Assam Times that the theme for this year’s silver jubilee conference is ‘Care and Respect for the Child.’

Kailash Satyarthi, Nobel Peace prize recipient of 2014, will attend the occasion as chief guest and keynote speaker at the inaugural session. Many prominent psychiatrists, including the president and vice-president of the Indian Psychiatric Society, will be present as speakers and resource persons in the scientific deliberations.

10 Dec 2012 - 3:10pm | editor
Amid tight security the Assam Assembly begins its winter session on Monday morning with a stormy. As the House began its proceedings AIUDF members stood up and demanded discussion on the seizure of... 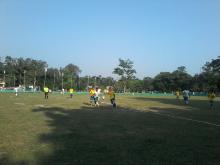 15 Jun 2008 - 5:45pm | editor
The Assam Government’s claim over Langpih gets more teeth as the Gauhati High Court has asked the Meghalaya government to a compensate an amount of Rs 1 lakh each to three residents of the area...