30 Sep 2020 - 8:17pm | AT News
Guwahati: Dibon Deka,  a BJP leader from Nalbari who is said to be one of the main accused in the police recruitment scam is likely to surrender before police.  According to sources,... 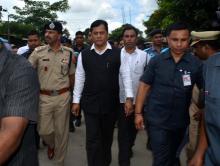 7 Aug 2016 - 4:12pm | Babul Gogoi
The entire incident of bloodbath in Balajan, in fact, is shrouded in mystery. The ground situation seems to have suggested utter cluelessness. The picture is still hazy. The statement issued by NDFB-...