After Congress, BJP is set to court yet another controversy over the ongoing process to update NRC.

The party strongly advocates the inclusion of the names of Hindu Bangladeshi immigrants in the updated NRC.

He further alleged that the Assam government has not been able to deliver the goods. 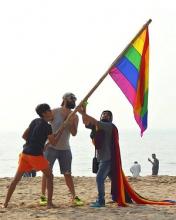 23 Nov 2017 - 3:03pm | AT News
Amid a statewide pall of gloom the mortal remains of Biju Phukan consigned to flames a day after the popular film personality breathed his last at the age of 70. His fans thronged in thousands at...

28 Feb 2012 - 3:48am | editor
Two of the greatest cultural titans of Assam were remembered in the same venue, on Monday. The biennial New Delhi World Book Fair saw the release of two new books on the life and times of Bhupen...