The overall flood scene goes from bad to worse on Wednesday when the surging waters have submerged more areas in 7 districts.

The Brahmaputra and its tributaries have been flowing above the danger level suggesting that it tends to take more grave turn.
The rising water level have breached embankments, inundated villages and damaged crop apart from rendering over 1 lakh people homeless.

According to the State Disaster Management Authority, the first wave of flood has affected 18 revenue circles in Lakhimpur and Dhemaji in eastern Assam, where nearly 45,000 people were affected by the overflowing rivers.
Tinsukia is hit by the incessant rains forcing the authorities to set up three relief camps.

The Brahmaputra is flowing over the danger mark in Nimatighat in Jorhat district, several villages in the river-island of Majuli have been also inundated. Solengi, Chatrang and Sessa — all tributaries of the Brahmaputra — have  inundated villages and standing crops, affecting over 21,000 people in the Gohpur sub-division of Sonitpur.

6 Mar 2014 - 2:50pm | AT News
Internal bickering seems to touched a new low within the poll bound Congress.Assembly Speaker Pranab Gogoi on Thursday called on party president Sonia Gandhi and apprised her of the state of affairs... 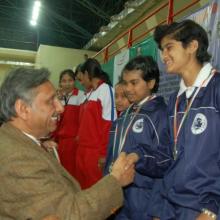 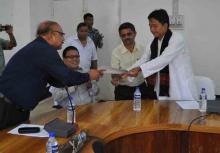