Rijit Konwar of Nazira Higher Secondary & Mulit Purpose School secored 10th position in the HSLC examination 2015. He   got totel  587 marks. People took out a huge procession as mark of honour to Rijit. Nazira regional units of AASU, AJYCP, AAMSU etc. and other feliciated him for his achievement. Rigit  belongs to a very poor family of  Nomati Dehingia Gaon and his father is a   cultivator.

Rajat Agarwal is back home

12 Jun 2007 - 5:30am | editor
Sivasagar : After a five day long will-they-wont-they, the militants have released Rajat Agarwalla in on Wednesday morning which gives the people of the area a sigh of relief.According to information...

Woman urged to protect their rights 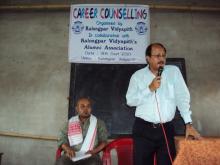