As the state is gearing up for the Assembly poll early next year the Narendra Modi government starts sending more ministers to prepare the groundwork for the poll victory.

Each of the central ministers have so far doled out promises to the voters.

Textile minister Santosh Gangowar promised steps to uplift the textile sector apart from a huge garment industry as he attended a function at Boragaon in the outskirt of Guwahati.

His counterpart in steel and mining Narendra Singh promised a steel depot in Silchar. He further set up a committee to tap the mines and minerals within the next 3 years.

"More ministers would visit the state to woo the voters," said a BJP leader in New Delhi.

None of the promises are likely to be implemented this year.

"It does make sense that the Centre is likely to forget the promises if BJP fails to form the next government in Dispur," say social activists.

19 Jun 2010 - 2:12pm | editor
In a major achivement city police have arrested 3 persons who have confessed the killing of engineer Manik Baishya on Thursday in Guwahati. During interrogation they confessed before police that they...

25 Apr 2015 - 11:15pm | AT News
Over 250 people hailing from the state are believed to have been missing after the 7.4 magnitude earthquake originated in Nepal on Saturday. They, mostly, were on visit to Kathmandu for eye... 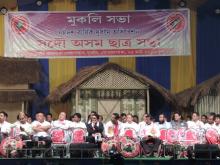 27 Mar 2015 - 10:16am | AT News
The All Assam Students Union will keep fighting all major issues confronting the state for decades. This was more or less of what the student leaders pledged at the end of the Goalpara convention...