The Recognised(Venture) Upper and Lower Primary Teachers’ Association,Kokrajhar district nit has decided to launch agitation on and from June 1 next demanding early provincialisation of schools as teachers are deprived from government facilities across the state.

A special meeting of the association was held at Rup Nath Brahma ME school premises on Sunday in Kokrajhar and resolved to launch strong agitation against government seeking early provincialisation of schools who were dropped from enlisted by state government in 2013.

The association slammed the state government for not taking provincialisation of schools said that government has been depriving the school as well teachers as junior schools are taking opportunities in the form of government discriminations.

Manik Chandra Nath,president of the Kokrajhar district unit of the association told that the concern department had announced all provincialisation norm and ways on internet,but government has not been implemented so far and making unnecessary harassement while executing the steps taken from concern department since 2013.

He said that the association held its special executive meeting and decided to lauch strong agitation seeking early implementation of provincialisation of schools across the state as they had put their demands to the state govt from June 1 next.

He has also warned the government for responsible whatever happen unwanted incidents during agitation in the district.

11 May 2017 - 8:17pm | Dibya J Borthakur
The additional chief engineer of state PWD department had a narrow escape as the Alto car ( AS 01 DF 9185 ) he was driving turned turtle after hitting into divider on NH 37 near Raha chariali on... 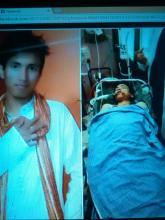 Imphal on the boil

8 Jul 2015 - 10:12pm | Pamei Tingenlung
After a brief silence, Imphal is again on the boil forcing the authorities to clamp curfew in the capital town on Wednesday.A school student was killed when security forces sprang upon a group of...