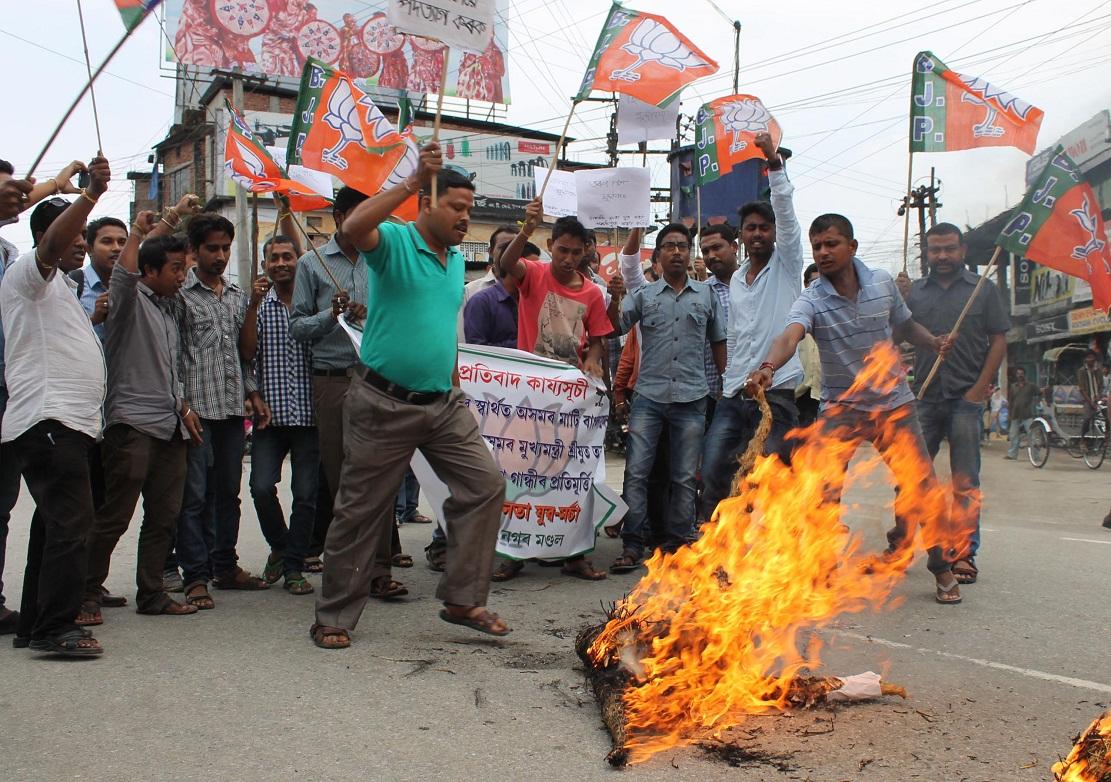 After months of intense debate and controversy, BJP has cleared the decks for the Indo-Bangla land swap deal in its original format triggering a massive protest across the state. State BJP leaders have blamed it all on the erstwhile Congress-led government after the central leadership apprised them of the position at a crucial meeting in New Delhi on Monday.

“We don’t want Assam to give even an inch of land to Bangladesh. Since it was signed by the erstwhile NDA government we can’t change the format. Even if want we don’t have number in Parliament. Had Congress supported us we won’t have done it,” said state president Siddharth Bhattachaya.

“It sounds strange. The BJP which has been trying to woo the people opposing the deal so long is set to support in Parliament? That too two days after the cabinet decided to exempt Assam. We doubt BJP’s intension,” said an AGP leader. He said that Congress and BJP are two sides of a coin.

“How the party decided to support the bill hardly 48 hours after the cabinet removed Assam from the purview of the land swap deal? We won’t allow it to happen,” said AASU leaders saying that a massive movement is the only option before the people.

Same anger is seen in Asom Jatiyatabadi Yuva Chatra Parishad. AJYCP leaders told Assam Times that they won’t sit idle. “We will prevent the Centre from implementing the deal. We will fight,” they rued.

Notably, New Delhi and Dhaka struck the deal when the UPA was in power. Then BJP maintained a studied silence. In his poll rally, Narendra Modi flayed the UPA government for striking the deal without honouring the sentiments of the people.

During his maiden visit as prime minister Modi started advocating the deal saying that it would help the state check infiltration from across the border.

On May 2, the Union cabinet exempted Assam from the purview of the deal much to a major relief for lakhs of people. Union minister Sarbananda Sonowal said that the Modi government was honouring the sentiments of the people.

Two days after on May 4, party president Amit Shah invited BJP MPs and state president Siddharth Bhattacharya and apprised them of no option but to support the deal citing lack of numbers in the Rajya Sabha.

26 Apr 2008 - 9:16pm | editor
Cocks seen in action during the cock fight, organized on the occasion of 136th anniversary celebration of Dhemaji Gohain Gaon Rongali Sanmilon at Dhemaji on 26-04-08. Pix by UB Photos.

18 Dec 2007 - 1:46pm | editor
The Assam unit of Bharatiya Janata Party vows to eliminate all corruption in the panchayat system if the party is voted in the upcoming panchayat polls. In its poll manifesto released in the city on...