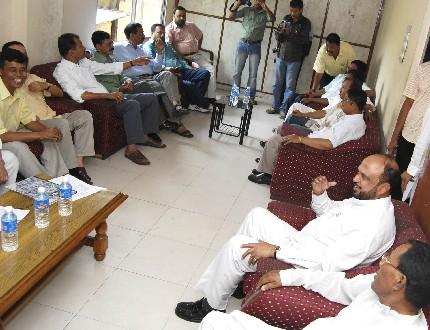 The unification of Assam’s regional parties have reached a crucial stage with the Asom Gana Parishad is hunkering down with three of its breakaway groups at its party headquarters on Monday. The first one breakaway to have formally kickstart the homecoming bid is former Chief Minister and theparty’s founder president Prafulla Kumar Mahanta at around 11-30 in the morning. After the “cordial” discussion, Mahanta left the office with a hope that the unification will be a giant leap towards ending the rule of Congress. This was followed by the coming of Trinamool Gana Parishad general secretary and the AGP’s never-say die-spirit and former minister Atul Bora. He has almost back to the party. Next meeting is slated to held with Purbanchalia Lola Parishad (Pabindra) group and its breakaway group Rajkumar group which are set to finalise the homecoming.

Notably, AASU has recently said it will oppose the homecoming of Mahanta tooth and nail saying him to be a betrayer and a failed pioneer of regionalism. Recently talking to reporters in the city, the AASU leaders said they will back unification of regionalism sans Mahanta. The same stand was endorsed by UNPA leader Amar Singh day before yesterday.

27 Aug 2012 - 1:18am | editor
Five persons were injured in a fresh incident of violence in Kokrajhar district on Sunday. The incident took place unidentified miscreants persons attacked five persons including a child near...