Assam Chief Secretary Jitesh Kosla administered oath of office and secrecy to Hagrama Mohilary as chief of BTC and 13 others as executive members in the presence of Governor Padmanabha Balakrishna Acharya today at a glittering swearing in ceremony at Bodofa Nwgwr ground, near BTC Secretariat today in Kokrajhar.

Mohilary took his oath of office and secrecy in English following Kampa Borgoyary as deputy chief  in English too.

All the newly elected members of BTC from different party and organisations were also present on the occasion which was attended by thousands of people from all walks of life.

Mohilary, taking after oath of office as chief in BTC for third consecutive terms,who is also leader of BPF Legislature Party said that that priority would be given to solve the problems of various communities residing in the BTAD. 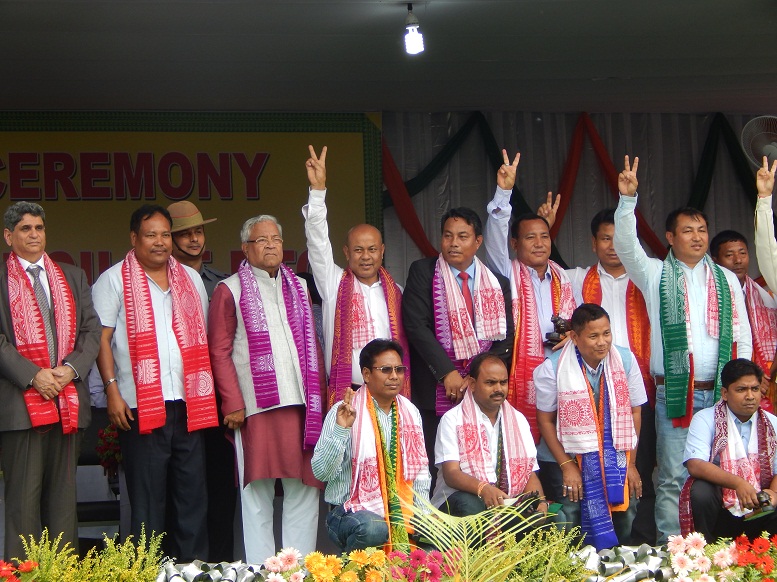 Mohilary thanks the public for giving the BPF party a mandate for the third time. He also urged the people, irrespective of caste, creed and community to give a helping hand in carrying out development activities and maintaining peace and harmony.

Mohilary assured to work for the welfare of the people.He said that his council will take step to implementing all clauses of the historic Bodo accord that signed in 2003 which are not still implemented. He has also urged upon the state and the central government in proper implementation of the  Bodo accord in letter and spirit. He also call upon the government of Assam to allocate fund as per population pattern which is over 12 percent so that development works can be carried out more sustain in the region.

Mohilary also promised 33 percent reservation for women in the VCDC and also a scheme for women soon in BTC. He has stressing the permanent peace and unity among different communities in the region said that his BPF administration in the council will do all round development for communities.

Governor of Assam Padmanabha Balakrishna Acharya in his speech call upon the BTC members to work for all round development for the welfare of the people so that all communities can get healthy administration in their council. He has hailed all newly elected members to the council and wished a good governance in the council. He said the real meaning of achieving the BTC will happen only when development takes place. He also calls upon to check corruption and be transparent in all development aspect.

BPF won 20 of the 40 member council Assembly following PCDR 7, AIUDF 4, BJP 1 and independents 8 in the election held on April 8.

21 Sep 2011 - 10:26pm | AT News
Annada Gohain, a resident of Kharghuli, breathed her last on 19th September 2011 at a private hospital in Guwahati at the age of 81 years. She retired as Additional Director (Agriculture) under Assam...