No political solution no peace: ULFA

The United Liberation Front of Asom has charged a section of people with trying to buy good names with the ongoing peace process. In its latest edition of Freedom, ULFA has said only a political solution could help Assam restore permanent peace on its soil. The outfit has welcomed Dr Indira Goswami for her untiring bid to ensure peace process and criticized the government saying the government’s talks with the PCG failed only because of the lack of goodwill from the part of the government. In the mouthpiece, ULFA further has alleged Union minister Aswini Kumar’s recent comment could spoil the on going peace bid.

25 Mar 2016 - 9:52pm | AT Kokrajhar Bureau
BTC chief Hagrama Mohilary, who is also BPF president reacting to the NDFB-S remarks of note to vote for BJP and AGP in the ensuing assembly election termed that it was meaningless.  Mohilary,... 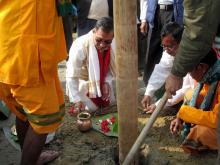 14 Dec 2015 - 9:46am | Shajid Khan
The foundation pillar of the  silver jubilee programme of Udalguri Bathou Mahasabha was instilled on Sunday at Sonaisri Fwthar, Harisinga in Udalguri district. The pillar was laid by Founder of...