The 24 hour Karbi Anglong bandh ended on Sunday morning crippling normal life across the hills district during the last 24 hours.

Called by at least 10 local Karbi organizations, the band ended peacefully at 5 in the morning in protest against the alleged rape of two women and a school student by army jawans on April 6 at Dokmoka.

Schools and colleges, offices and banks, shops and markets remained closed on Saturday under the impact of the bandh call.  District authorities told Assam Times that there was no report of any untoward incident during this period.

The incident took place on April 6 when a few army jawans raped three women at Khorsim Athoi village under Dokmoka police station as they were conducting an operation against militants. 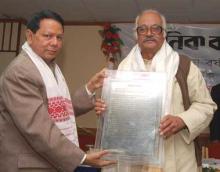 22 Jan 2008 - 7:44am | editor
Father of Assamese journalism Radhika Mohan Bhagawati is being felicitated by Union Minster for Information and Broadcasting Priyaranjan Dasmunshi as he completes 50 year in the Journalism field at a...

31 Jan 2018 - 8:24am | AT News
GUWAHATI: Yet another shoot out strikes no less shock and anger in Kamrup suggesting utter failure of police to make the premier north eastern city and it's outskirt areas a safe and secured....