Dispur on Monday has asked the Darrang Deputy Commissioner to file a detailed report on the incident where nearly a dozen students were taken ill after they were administered JE vaccination on Monday.

According to the district authorities, the students who have been undergoing treatment at the Mongoldoi Civil Hospital are stable and a number of tests are in process to ascertain the cause.

The students told Assam Times that they came to feel dizziness and nausea after taking the vaccines.

Health depatment officials said that it should not strike unnecessary panic among the school goers across the state.

They told Assam Times that the JE vaccination won’t halt following the Darrang incident. Children up to 15 years of age in several districts are being vaccinated to get rid f possible outbreak of Japanese encephalitis (JE) and acute encephalitis syndrome (AES). 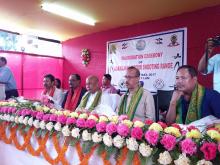 23 May 2017 - 9:35am | AT Kokrajhar Bureau
BTC chief Hagrama Mohilary expressed concern over conviction of DHD leaders by NIA  on Monday. He said  that the government should rethink over the judgement while addressing BPF's CWC meet...

25 Jan 2015 - 9:36am | Stuti Goswami
The Munin Barkotoki Memorial Trust organises a two-day seminar tited "Munin Barkotoki's Failed Dream? Literary Criticism in Northeast India" on January 31 and February 1. The event will be held at...