Guwahati police got a dreaded fraud in its custody who duped many people in Assam taking crores of rupees promising benefits from the Prime Minister’s Office.

A special team of CID has been interrogating the fraud to extract revelations.

Another police team is in Delhi to get another fraud in its custody in a day or two. Known as Sudipta Chatterjee and Snehendu Jana, the duo allegedly cheated many people of crores of rupees under the fake banner of Prime Minister’s Office. Delhi Police caught the duo. recently. 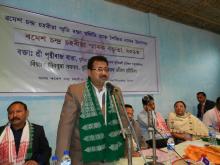 1 Nov 2017 - 9:24pm | AT Kokrajhar Bureau
A community fishing was carried out on Wednesday morning at Longa Irrigation River near Ramfalbill I Kokrajhar district which created an amusement among all sections of society since...