Modi, Amit voted out in Delhi 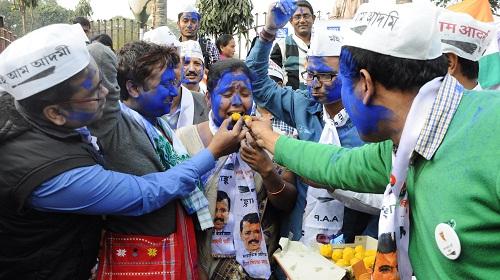 Finally, Narendra Modi and Amit Shah have been voted out. That too in Delhi where the party had to remain satisfied with just 3 seats. Congress failed even to open an account.

The Arvind Kejriwal led AAP ensured a landslide victory with 67 seats 39 seats more than what it got in 2013. BJP could not retain 29 seats it got in 2013 while Congress lost all 8 seats in the Delhi assembly polls. BJP’s chief ministerial candidate Kiran Bedi lost to SK Bagga by over 2,200 votes.

29 Sep 2012 - 5:33am | editor
The overall flood situation continues to improve on Friday. The water levels of the mighty Brahmaputra and its tributaries are receding.The death toll has gone upto 27. Six people have been remained...

28 Jul 2007 - 2:05pm | luitneildon
GUWAHATI: After years of toil, this would be a dictionary with a sweeping range. The Asomiya Jatiya Abhidhan, which is being compiled and edited by a 25-member team of lexicographers, would see the...