Capitalism has been taking literature into the market. Only the readers can only stop this growing trend of literature in the market. This was what more or less of what the writers spoke when they met a crucial session of the Guwahati Lit Fest on Saturday.

Moderated by journalist and writer Prasanta Rajguru, the prolific writers said that literature is one of the reliable vehicle of expressing one’s social commitment and identity. 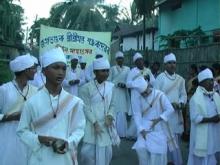 2 Apr 2015 - 11:03am | AT News
Do you want to know your forefathers? You have hardly any reason to worry. Its available just at the click on a mouse.Come to your nearest NRC seva kendras. The district administrations, mostly, have...