7 Jun 2015 - 1:51pm | AT News
The special police officers and Dima Hasao district administration are trading charges and counter charges over the mahir shoot out on Saturday where three agitating SPOs sustained injury.The SPOs... 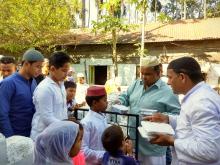 1 Dec 2017 - 7:02pm | Shajid Khan
Milad-un-Nabi, the birth anniversary of Prophet Mohammad was observed with traditional fervour in Tangla on Friday.Celebrated on the 12th day of Rabi-ul-Awwal, the third month of the Islamic calendar...