The Akhil Bharatiya Hindivasi Yuba Chatra Parishad in BTAD has accused Congrss party of playing politics on the carnage of Adivasi peoples in the state.

Hindivasi Yuba Chatra Parishad leader Gopal Prasad came down heavily on former minister and Congress leader Ripun Bora saying, “Who is Ripun Bora to talk to reports about the? Bora is not entitled to speak.”

Slamming Bora he said that the statement was very unfortunate and urged him to stay away from giving such immature statement in near future. 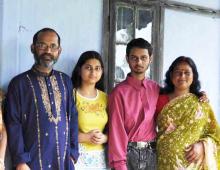 4 May 2015 - 9:14pm | AT News
Simmering differences seem to have gripped the Garo people in BTAD over the nomination of an elected member from the community in the newly elected territorial council.  A section of the people...