The death toll in the five incidents of attacks in Sonitpur district has crossed 50 with the recovery of more bodies on Tuesday. The dreaded serial attacks were reported simultaneously from 6 to 7 in the evening.

According to information, at least 40 people, all Adivasi people, were killed in Sonitpur district alone. Most of these bodies were recovered from the Paboi reserve forest areas till 9 in the evening. In Batashipur also, NDFB-S killed not less than 5 people forcing security forces to intensify operation along the Assam-Arunachal Pradesh border.

Security forces are intensifying a full scale crackdown against the militants along the Indo-Bhutan border after the militants killed 4 Adivasi villgers in Ultpani in Kokrajhar district.

3 Aug 2014 - 9:51pm | AT News
The Assam assembly begins its budget session on Monday with a stormy note with the Opposition taking on the government alleging failure on all fronts. As the House met at 9 in the morning with... 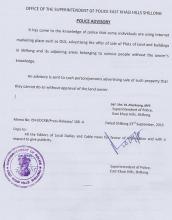 23 Sep 2015 - 8:37pm | AT News Shillong
Despite a set of stringent measures Shillong is teeming with a company of imposters where the common people are bound to bear the brunt. Sources told Assam Times in Shillong that a section of...