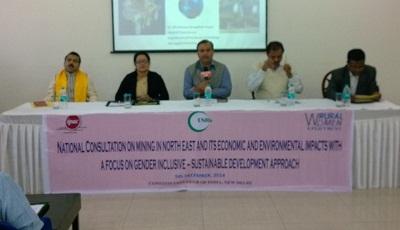 Extraction of natural resources would ensure sustainable development if the local communities are taken into confidence. Without considering the rights of the indigenous people and the impending impact on the bio diversity of an area, extraction turns into exploitation of natural resources. This was more or less of what the experts feel while they rubbed shoulders at a consultation in New Delhi on Thursday.

Jointly organised by Coalition on Enviroonment  and Natural Resources and the Indraprastha Public Affairs Centre, the Consultation on mining (oil, gas and natural resources) in north-east and its economic and environmental impacts with a particular focus on gender inclusive sustainable development approach ironed out a slew of suggestions for the extractive companies and the government.

In his address, environment expert and head of environment with the Directorate General Hydrocarbons Kuldip Sharma  said that sustainable development as well as extraction should be allowed to go on. He said the government is taking all necessary steps including prior studies of affected areas before giving extraction permission to companies.

President of CORE Manipur Dr Debabrata Roy Laifungbam in his speech outlined the permission to Netherland based company Jubilant Energy back in 1995 to for oil extraction in Manipur. He said that local people were not taken into confidence who came to know it only when the company came to carry out seismic work, drill exploratorations and construction work in the project site. The

Another expert Rajesh Singh Sisodia highlighted the wrongdoing on mining industries, bad-governance in the extractive areas of Chhattisgarh towards affected communities.

Human rights activist Babloo Loitingbam said that idea of multiple stake holder coming together – government, academics, civil societies etc. is ok. He opined that humanizing the corporate and the state machineries is the more urgent need.

The focus of attraction was the overview of the extractive resources in the region and the associated industries critically presented by Dr Subrata Gogoi who is the senior professor and head of Dibrugarh University’s Petroleum Technology Department.

The consultation aimed at providing a platform for direct interaction between the policy makers and the civil society from the region. It further had an objective to formulate and develop policies based primarily on a “Gender Inclusive – Sustainable Development” approach to the process of economic development in the region.

This Consultation included discussions and sharing of perspectives by all stakeholders to the extractives reliant economic development process in the North-East: policy makers, investors in the region, civil society representatives from the region and experts on environment, sustainable development and gender in extractives sector.

The outcomes would inform the policy of the Centre in its efforts at increased and continued economic exploitation of the economic resources in the North-EAST and in formulating the pending legislative enactments on mining and extraction in the country.

London Marathons for a good cause in Assam

13 Nov 2017 - 11:38am | AT News
GUWAHATI:The more officers are believed to have been preparing to surrender before police probing the APSC scam where altogether 22 officers have already been arrested. According to sources,...