Both Delhi and Dispur are mired in a bitter blamegame over the recent explosion in Dibrugarh were 2 persons died and 20 others sustained injury.

The Assam Government on Tuesday hit back at Sarbananda Sonowal saying that the Centre can not escape its responsibility a day after the sports minister blamed it all on the Tarun Gogoi government for the incident.

Attack on Dispur is also an attack on his own government, said the statement.

"Instead of blaming the state government alone, the union minister must also realise that the central government too has a major role to play as all the insurgent outfits have their bases outside the country," it said. 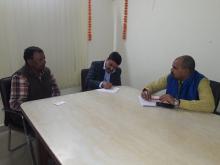 6 Feb 2017 - 6:37pm | AT News
Innovative healthcare program under the banner of ‘Evening with a Doctor’ at Guwahati Press Club in northeast India has completed six months, where the member-journalists of the press club along with...

EMFA express shock at the demise of Manideep Boro

19 Jul 2017 - 9:20am | Shajid Khan
The Zubeen Fan Club members of Udalguri inspired by singer Zubeen Garg went on a collection drive on the streets of Tangla town for the flood affected people on Tuesday. Nearly 25 members led by its...