A residential building was partially damaged when suspected ULFA militants are beleived to have lobbed a powerful grenade in Doomdooma in Tinsukia district on Friday.

The explosion took place in Chamdang tea garden area in the wee hours when the suspected militants lobbed the grenade at the residence of businessman Mahabir Agarwalla. There is is no report of any casualty. But the building was partially damaged.

Senior police officials arrived in the spot and search operation is going on. Details awaited. 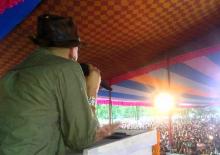