After Golaghat, the Assam-Nagaland border in Sivasagar district is on the boil these days. The epicentre is Gelekey where Naga miscreants resumed reign of terror. Suspected Naga miscreants set on fire five houses in the tea gardens on Wednesday three days after a villager was shot dead at the paddy field in Golaghat.

The incident took place at Singibeel area in the wee hours where the miscreants who sneaked into the area from across the inter state border and burnt down seven houses full of green tea leaves. Security forces rushed to the spot but by then the miscreants disappeared.

The incident took place three days after the miscreants opened fire at a group of villagers in Ratanpur n Golaghat distrct when they were harvesting crops in the paddy field. One of the villagers died while four others are still undergoing treatment.

These incidents have forced the security forces to fan in the nook and corner of the border areas in search of the miscreants who have been mongering trouble for the last couple of days. 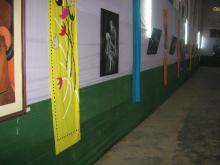