Bodo Sahitya Sabha's flag was hoisted by noted writer Lakhsman Boro,who has graced as a chief guest on the occasion which was led by M. Gerema, Home Secretary of NDFB(P). 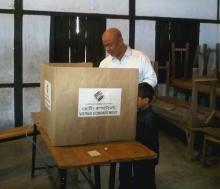 15 Feb 2014 - 11:35am | AT News
The Opposition on Friday came down heavily on the Tarun Gogoi government alleging utter lawlessness and rampant corruption in the state.Participating in the debate on the vote on account, AGP...