Festival of northeast begins in Delhi

24 Aug 2007 - 4:35am | pbaruah
Guwahati :Blood still oozes atop the North Cachar hills with the report of two more killings at the hands of the dreaded Black Widow on Thursday. According to information received, the anti peace... 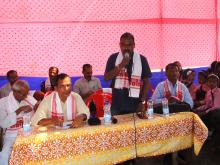