Films have been one of the strongest tools for social change in our society. In a bid to create awareness on social issues and promote documenting issues through lens, Saraighat Film Festival was organised by North East Youth Foundation (NEYF) on 2nd November in Guwahati. All together 10 short documentaries were screened which were made by young people upto the age of 25.  Themes for the festival were urban poverty, human rights and livelihoods.

‘Why’, a documentary made by Kamal Lochan Deka of Cotton College was adjusted as the best movie by the judges. This film revolves around the life of one of the rag-pickers who dwell in the city. It focuses on the fact humanity has vanished among the civilised but it still exists among the downtrodden ones. Second best movie was ‘Annekhan’ and this was made by Upakul Dutta, Ibney Alom, Gaurav Boruah and Prajnyan Goswami of Dibrugarh University. Harsh Raj Baruah a student of Class X got much appreciation as he made a documentary related to the issue of child labour. Apart from the judges prizes there was a viewer’s choice prize which was also begged by ‘Why’. Tinat Atifa Masood , Mayank Taparia and Vijay Naidu were the judges who had appreciated the organiser and all young film makers . Bani Prakash Das, guest of the festival spoke his experience of making documentaries and appealed young people to come forward and make documentary films in future.

Ranjan K Baruah, Convener of NEYF has briefly spoken about the idea behind the festival and also importance of similar film festival. NEYF has been working with young people and as a part of engaging young people for social transformation they have started Saraiaghat Film Festival which would be an annual event for young people of the region in particular and other is general. This programme was supported by North East Dialogue Forum. All the participants were given books and certificates apart from prizes to the winners of the festival. Prize winning movies would be screened in different campuses in the state and other parts of north eastern for encouraging young people to make documentaries on social issues. It was attended by professionals, business person, activists, media persons, youths and students from different parts of the state. 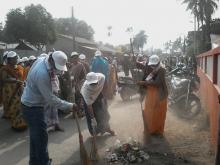 19 Feb 2014 - 9:15pm | Drishana Kalita
Kunti Bora, a simple woman from Nagaon formed 22 self help groups encompassing hundreds of women in 6 districts of Assam. Lalthanzami from Mizoram, a victim of domestic violence, set up a piggery...