Evolving through several decades, the modern art scenario in the North-Eastern India has become quite vibrant and dynamic. In an attempt to showcase the new developments in this arena, thirty three works of modern art by young artists of North East India were exhibited at Kanakakkunnu Palace, Thiruvanthapuram , Kerala from 17th February to 28th February, 2008. Painting, graphics, sculptures, installations and video art from Assam, Manipur, Meghalaya, Tripura, Sikkim, Arunachal Pradesh, Mizoram and Nagaland were displayed to showcase the modern art scenario of the region before the people of Kerala., which drew rave attention both from the cognescenties and the public in general.

The exhibition sponsored by Rashtriya Lalit Kala Academy was a part of the Octave 2008 Festival. Octave, an annual event organized by the Ministry of Human Resources to present the multi hued cultural resources of North East India before the rest of India was held this year in Kerala. The art exhibition was inaugurated by M. A. Baby, Minister of Education and Cultural Affairs, Kerala. Sri Baby commended the Lalit Kala Academy and the exhibition curator Moushumi Kandali for successfully organizing the exhibition in spite of severe logistic and infrastructural handicaps. In his lecture, the minister dwelt on the universal language of art and the role of modern art in countering the infectious anti-cultural aggressions by vested interests. Sri M. Ramachandran, the Deputy Secretary of Lalit Kala Academy commented on the pressing need to give the much needed exposure to the region and its art. The inaugural function was well attended by the art loving people of Kerala including luminaries such as poet-artist Savithri Rajeevan, Trade Unionist & writer S. Radhakrishnan, poet Anita Thampi, the dignitaries of Kerala Lalit Kala Academy etc. Two authors from Assam, Jiban Narah and Imran Hussain were also part of the audience. Sri M. A. Baby lit the ceremonial lamp accompanied by Sri M. Ramachandran and Moushumi Kandali. At the end of the function Sri Baby and other dignitaries went around the exhibition and were appraised about the artists and the displayed works by Moushumi Kandali, the curator and also a noted short story writer. Earlier in her speech, she threw light on the challenges facing the artists of North East and the general overview on the modern art scene.

As informed by the curator, the art exhibition showcased different genres of contemporary art created by the artists from the age group between fifty to twenty five. This time, the focus was laid on the young artists rather than the senior artists who are already established names in the art scene of India. As this was a curated show, there was a thematic line which the artworks conformed to. The exhibition, entitled “Whistling Woods: Space/Time Encoded” delved on the Spatio-temporal realities in different dimensions such as the pictorial, political, psychological or philosophical. Of course, the political seemed to be the predominant trait, as pointed out by the curator. It was an eye opener for the art lovers of Kerala, a land known for its artistic developments as for the first time they could witness the artistic endeavour of the North Eastern India. The artists included in the exhibition were Raphael Warjri, Benedict Hynniewta, Banamali Sharma, Naorem Labango Meiti, Y Gunindro Singh, R. K. Thambalsana, Temsu Yangar Longkumar, Pangeronen Aier, Vijay Mani Thulung, Dipika Saha, Mrinmoy Debbarma, Jayanta Bhattacharya, Punyo Choubin, Rosiam Liana Ralte, Dilip Tamuli, Munindra Narayan Bhattacharyee, Utpal Baruah, Simanta Jyoti Baruah, Rajkumar Majimder, Kishore Kumar Das, Debananda Ulup, Shiv Prasad Marar, Lutfa Akhtar, Maneswar Brahma, Manika Devi, Sabita Pegu, Prabin Kumar Nath,Ratul Gogoi, Tridib Dutta, Subhakar Laskar, Abanta Borah, Dadul Chaliha and Chandan Bejbaruah. A folio of selected artworks and the curatorial write up will be published by the Rashtriya Lalit Kala Academy to commemorate the event. Moushumi Kandali commented that due to restricted number many of the talented and dedicated artists could not be included. She has requested the authority to make the Octave art exhibition more expansive in the successive years.

15 Aug 2010 - 9:20pm | Nava Thakuria
As usual, the journalists and citizens of Guwahati have celebrated country’s Independence Day at Guwahati Press Club. Defying the diktat of militants, who called for a 15 hour general strike...

6 Jun 2008 - 2:00pm | editor
It's official. The Congress high command talks tough to the Assam Congress following the arrest of sacked education minister Ripun Bora by CBI while he was trying to bribe an official of the... 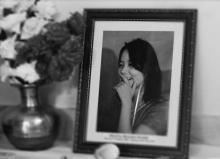 23 Jul 2019 - 11:25pm | Taw Nana
How often we mortals relate our most innocent and happy-self to places and faces back from our childhood or college days. I am not saying all, but most people do. Some of my priceless memories were...