Kaushk Bora has been rescued 24 hours after he went missing. The Digboi Refinery executive director was safe when police rescued him on Monday evening inside the Pengeri Reserved Forest. He was lying asleep inside the forest.

Bora, who has been keeping unwell for the last couple of weeks said nobody kidnapped him and that himself went there. Doctors attending on him after the rescue said that there was something wrong with the top IOC official.

He went missing on Sunday morning after he came out of his residence with his own car which was found abandoned on the Pengeri-Bordumsa Road.

His family members lodged complaint with the police who launched an operation in the entire area suspecting it a kidnap case. 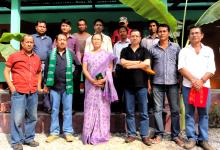 5 Jun 2010 - 6:22pm | Jayanta Kumar Das
People of Kalaigaon have expressed satisfaction at the over all good performance of the students of various schools situated in the backward rural areas of Kalaigaon. In the recently declared...