No respite for Ranjan; bail denied

Contrary to what was widely expected, a local court in Guwahati refused bail to Ranjan Daimary the bail fearing it a tactic in the name of peace process.

Hearing the bail petition along with the government’s no objection certificate, the court said that it may be a tactic by the NDFB boss to ensure release which cannot be encouraged under any circumstance.

The court’s judgment was expected on Tuesday. But it was reserved till Wednesday. The government did not oppose the bail when the NDFB boss pledged to carry forward the peace process with the Centre.

He earlier procured bail with the same plea. But was re-arrested and sent to jail on September 29 when the designated Tada court refused to extend his interim bail further.

21 Aug 2007 - 4:00am | pbaruah
New Delhi : The North Eastern Council begins its 8th Sectoral Summit here at the Vigyan Bhawan on Monday morning to focus on issues pertaining to education, sports and art... 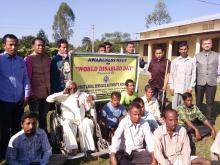 Say no injustice to disabled lots

3 Dec 2017 - 8:26pm | AT Kokrajhar Bureau
Kokrajhar,Dec 3: Along with other parts of the globe, Kokrajhar observed the disabled day focussing that the disabled lots have been deprived of rights that made reservations in the government...