The Asom Gana Parishad in rank and file is all set to stage a sit-in demonstration across the state on October 29 in protest against the soaring prices of all essential commodities.

Senior party leaders told Assam Times that they would stage the sit-in day long demonstrations in front of the offices of the DCs and SDCs. They alleged that the governments have been encouraging the business men to hike the prices of the essential commodities.

7 Apr 2014 - 8:34am | AT News
Union minister and Lakhimpur Congress candidate Ranee Narah has casted his vote after the first phase of Lok Sabha polls began on Monday morning.Accompanied by her husband Bharat Narah, she arrived... 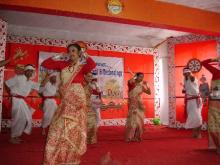 20 Aug 2007 - 2:26pm | moushumibhattacharya
Assam's presence was felt by one and all at Ishan Institute of management and Technology, Greater Noida (Dt. Gautam Budh Nagar) Uttar Pradesh by a beautiful performance of Bihu Dance by assamese...