In yet another bizarre incident, suspected NDFB-S rebels snatched INSAS rifles from the security forces in Kokrajhar on Tuesday forcing a combing operation in the entire area.

The incident took place at Khalashi area near Saralbangha river in the afternoon where the jawans of the ecological task force was on plantation duty.

A group of militants who outnumbered the security forces reached the spot and took away at least 35 INSAS rifles at gunpoint. Then they disappeared from the spot without any attack.

The ecological task force has been looking after the plantation work with the help of BTC forest department and 15 Dogra Regiment for the last two years. Combing operation is on to nab the rebels.
.....................

29 May 2011 - 2:17pm | AT News
An unhealthy competition for breaking news seems to have raised doubts on the overall credibility of media these days. This was more or less of what Ranjeet Sekhar Mushahary said when he was opening... 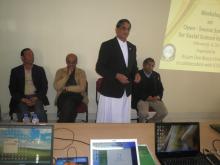 6 Feb 2014 - 10:11pm | CM Paul
A group of 32 scholars from northeast India are participating in a three day workshop on “Open Source Software for Social Science Research” at Assam Don Bosco University Guwahati. The program being...