Chief Minister Tarun Gogoi gave hint of tax holidays for investments in the infrastructure sector. Gogoi said it when he was addressing an infrastructure conclave in Guwahati on Friday.

He said the industry should take risk as the one who takes risk always rise and that the entire country was lagging behind on infrastructure front compared to other nations.

The picture in the North East is very disappointing. In his address at the PHDCCI-sponsored conclave, the Chief Minister also invited businessmen to invest in education sector. 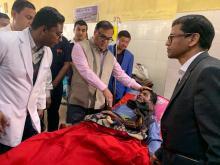