Guwahati: Where VVIPs fear not to tread

All of a sudden, Guwahati has become a hot destination for the film stars, cricket stars, industrialists. One after another VVIPs and VIPs have landed at the Indira Gandhi Atheletic Stadium in Sarusajai on Monday afternoon.

Former cricketer Sachin Tendulkar arrived in the city as his team Kerala Blasters are taking on John Abraham’s highlanders who landed in Guwahati in the wee hours. Accompanied by Anjali Tendulkar, the master blaster landed in the city by a chartered flight at 2-30 in the afternoon to enjoy the second ISL match from 7 in the evening.

This would be followed by the arrival of Reliance head Mukesh Ambani. Accompanied by his wife ISL chairperson Nita Ambani and son, arrived in the city at 3-30 in the afternoon through their own flight.

Another person in the schedule is none other than Amitabh Bachchan who arrived in Guwahati in the afternoon along with his son Abhisekh to enjoy the ISL match slated to begin at 7 in the evening. This is apart from the arrival of world championship boxer Mary Kom.

The Kerala Blasters are taking on the highlanders named as Eight One United a day after Saurav Ganguly’s Kolkata team defeated the Mumbai counters.

20 Oct 2015 - 12:07pm | AT News
In yet another major change in the pre poll political landscape in Dima Hasao district, several Congress leaders are believed to have been preparing to join BJP. The date of joining has yet to be...

28 Nov 2017 - 9:54pm | AT News
GUWAHATI:The United Liberation Front of Asom(ULFA-I) reiterated sovereignty and independence for Assam alleging decade old injustice, negligence by the mainland people.In a statement issued on the... 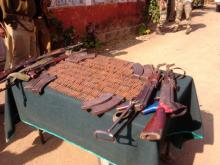