A hardcore NDFB(S) militant was killed at an encounter with rival faction in Udalguri district on Wednesday. The encounter took place at Rowta where an ultra died on the spot. Identified as Nirjon Basumatary alias Ganda alias B Nangtha, the NDFB(S) man was killed when two groups of the militant outfits clashed with each other. Three civilians were also injured in the crossfire. They have been undergoing treatment at the Gauhati Medical College Hospital. They were identified as Lalit Swargiary (30), Pratap Boro (24) and Ratneswar Boro (22).

Guwahati to honour Don Bosco with a statue

26 Jul 2015 - 1:12pm | CM Paul
The month of August will see several celebrations in the city of Guwahati, the gateway of northeast India, to mark the conclusion of the bi-centenary of the birth of St John Bosco.The state of Assam...

26 Aug 2011 - 2:34am | editor
Delhi police detained KMSS general secretary Akhil Gogoi when he was staging dharna in front of prime minister’s residence on Thursday. According to information, Gogoi along with 50 other... 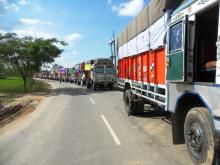 22 Sep 2010 - 3:46am | Ritupallab Saikia
The ongoing economic blockade in protest against the atrocities of Nagaland Police over the students of Assam has reached its third day today. More than three hundred trucks carrying amenities to...