The heat of Assam-Nagaland border violence seems to have touched Dispur.

KMSS protestors on Wednesday staged dharna out the assembly demanding steps to defuse the escalating tension along the inter state border. KMSS leaders said that the Gogoi government has been failing to firmly deal with the situation.

Speaker Pranab Gogoi appealed to the protestors to remain calm. He assured them of steps to efficiently deal with the situation where at least 14 local residents of Uriamghat were killed in Naga miscreants.

18 Mar 2010 - 1:40am | Dibya J Borthakur
“Common people are most of the time unaware of the welfare policies and programmes implemented by the governor . But a multimedia publicity programme at the grassroot level like the Public...

20 Oct 2015 - 12:07pm | AT News
In yet another major change in the pre poll political landscape in Dima Hasao district, several Congress leaders are believed to have been preparing to join BJP. The date of joining has yet to be... 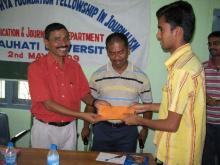 2 May 2009 - 9:12pm | Bikash Das
Paresh Baishya Foundation of Guwahati today awarded its fellowship for the study of political journalism of Assam to Shyamanta Deka, a student of Communication and Journalism department of Guwahati...