Janmastami is being celebrated with much traditional religious fervor across the state to mark the birth day of the Lord Krishna on Monday.

Well decorated temples and namghars are teeming with devotees from Sunday night. A series of cultural functions are also lined up on the occasion.

The focal point of attraction is the ISKCON temple at Ulubari in Guwahati where people have been thronging in thousands to attend the celebration.

The temple will hold the celebration for the next three days. The Assam Times family also celebrated the Sri Krishna Janmastami at its headquartered in Guwahati on Monday morning. 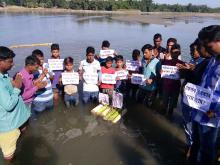 6 Nov 2017 - 10:30pm | AT Kokrajhar Bureau
In a symbolic agitation to draw  government attention over  a bridge in Kokrajhar, peoples from greater Kamalachara,Makrapara near Bhotgaon southern worshipped Hagrama Mohilary, BTC...

APCC talks of BJP U turns

21 Jan 2015 - 8:08pm | AT News
After New Delhi, now its Rajib Bhawan’s turn to talk of NDA’s U turns. Chief Minister Tarun Gogoi and APCC president Anjan Dutta on Wednesday released a booklet outlining the U-turns of the Modi...