The flood-hit areas in Nagaon district are getting army help to get rid of the ravaging flood waves.

The district administration sought Army to help rescue 145 marooned people at Kalapani village in Koliabor circle in the district where unprecedented rain resulted in inundation over a large area.

Troops from Gajraj Corps were requisitioned around 8pm on August 16 and the Army immediately deployed a flood relief column under Lt Col Pinaki Chakraborthy from Misa Army Camp at night.

The Army has so far evacuated 145 civilians — including 30 men, 55 women and 60 children — to a relief camp and provided first-aid and relief material. 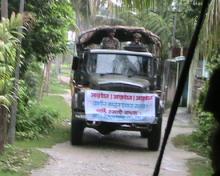