Tension refuses to die down in Golaghat district along the Assam-Nagaland border.

Two more bodies were recovered on Sunday who were believed to have been killed by the Naga miscreants.

Local residents in Uriam Ghat area with the help of security forces recovered the bodies from Chainpur village where the miscreants unleashed a reign of terror on August 12.

The authorities have confirmed the number of injured from 3 to 7 in the attack.

The night curfew from 6 pm to 6 am in the area along the inter-state border will continue in order to avoid any untoward development. / 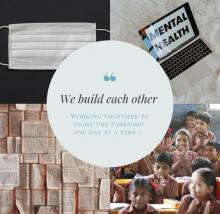 12 May 2021 - 5:01am | CM Paul
A group of Non Government Organizations (NGO) in the hills have come together to fight Covid 19 with joint well being campaign with slogans: ‘Bring Back the Smiles’, and ‘We Build Each Other....

5 Nov 2017 - 10:36pm | Akshaya Pranab Kalita
Namrup also paid homage to Dr Bhupen Hazarika on the  6th death Anniversary of the Music Maestro on Sunday along with other parts of the state. Former minister Pranati Phukan opened the...