Can a ruling party legislator play the role of the Opposition parties in the assembly?

The question seems bizarre. But the answer is a simple yes if Dr Himanta Biswa Sarma is any indication.

Hardly a month after he put in his papers as cabinet minister refusing to work under Tarun Gogoi, Dr Sarma on Monday criticized a section of his party colleagues alleging that they were trying to remove Pranab Gogoi as the Speaker.

The outgoing education and health minister alleged that two Congress legislators have sought legal opinions to dislodge Gogoi as the Assembly Speaker who enjoys a separate degree of veneration among the legislators of all parties.

Dr Sarma’s role was on the expected line when immediately after his resignation, he announced that he would play the role of a constructive opposition on the floor.

But his and his associates are not in a position to go beyond a certain line after the party has issued whip to the legislators not to go against the government.

15 Sep 2015 - 8:37pm | AT News
After days of will-he-won’t-he, Dr Himanta Biswa Sarma put in his paper as Jalukbari on Tuesday. Dr Sarma, who has already joined BJP last month, handed over his resignation letter before Assam... 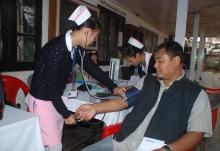