The Assam assembly begins its budget session on Monday with a stormy note with the Opposition taking on the government alleging failure on all fronts.

As the House met at 9 in the morning with question hours, the Opposition parties started launching scathing attack on the government citing the issues one by one.

Despite repeated order from Speaker Pranab Gogoi, the legislators from AGP, BJP and AIUDF held the government responsible for the issues confronting the state for years.

Later normalcy was restored and the Opposition allowed the House to proceed with the question hours.v

Chief minister Tarun Gogoi, who is holding the finance portfolio, is all set to table the state budget on August 11.

But all eyes are fixed on the Congress legislative body which is divided over its leadership.

Dr Himanta Biswa Sarma, who has resigned from the cabinet opposing Tarun Gogoi’s leadership along with his associates have been trying to corner the government on the floor.

But Congress insiders refused the possibility saying that the party has issued whip to toe on the party line on the floor to which the dissident camp agreed to.

Moreover, the dissident camp is likely to find it difficult to ignore the partyline in the face of their declining strength.

Over 20 legislators have separately called on Chief Minister Tarun Gogoi and pledged their support during the last 15 days. 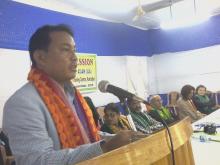 19 Dec 2015 - 6:37pm | editor
BTC deputy chief Kampa Borgoyary inaugurated the delegate session of the 19th annual convention of the Journalists' Union of Assam (JUA), which has got underway with two-day programme scheduled here...

24 Mar 2013 - 8:34pm | SK Hasan
Vetern social worker and ex. Vice Chairman of Nazira Municipal Board Md. Ali Hassan daied after a prolong illness at his own residence of Nazira on March 23. He was 65. He survived by his wife, 2...

31 Jan 2015 - 10:07pm | Hantigiri Narzary
The Peoples’ Co-ordination for Democratic Rights (PCDR),a united organisation of various communities in the region has decided to put own candidate in all 40 seats of BTC coulcil elected slated to be...