Days of uneasy situations are back to Dima Hasao district. Unidentified miscreants kidnapped a construction project manager at gunpoint on Tuesday.

Identified as Niron Kumar Mahajan , the top official of the Kolkata-based construction company was abducted near Hathikhuli under Langting police station in the morning.

The construction company was engaged in widening of a four-lane project between Hatikhuli and Mandadisa.

Security forces are on a combing operation to rescue the 48 year officer.

6 Oct 2015 - 7:41pm | Hantigiri Narzary
The Bodoland Students Union (BSU) has appealed to the Northeast people to vote for Proneeta Swargiary who is a finalist in the ongoing DID Season 5, dancing competition in the ZEE TV. Addressing...

19 Sep 2014 - 10:12pm | AT News
Good news for the entrepreneurs. Courtesy Tarun Gogoi. The Chief Minister on Friday unveiled the Angel Fund floated to help first generation skilled youths to set up micro and small enterprises. He... 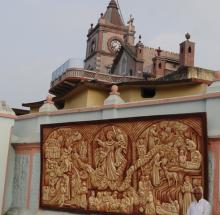 30 Mar 2018 - 10:54am | CM Paul
Bandel, West Bengal —   The head priest of the oldest Catholic church in eastern India has called people to “actively promote peace and harmony in these volatile days by extending good will...