Nazrul gets health, education to Pradyut

Chief minister Tarun Gogoi on Wednesday allocated additional portfolios temporarily to four ministers in his cabinet a day after he dropped two ministers.

Food and Civil Supplies and Consumer Affairs Minister Nazrul Islam will look in the health and family welfare. Pradyut Bordoloi will hold additional portfolio of education apart from power and industry.

Minister of State for Excise, Sports and Youth Welfare Ajit Singh will hold cooperation as an additional portfolio.

29 Mar 2014 - 2:10pm | AT News
Prime minister Dr Manmohan Singh said the ten year long wonderful performance of the UPA government and the Tarun Gogoi government in Dispur would be the key to the victory of the ruling party in the... 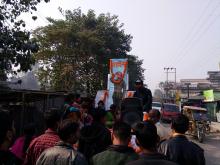