The Baksa district administration keeps army on stand-by in view of escalating tension after security forces recovered three more bodies from the Beki River on Sunday.

The police resorted to blank firing to disperse a mob for holding a protest against the Baksa killing by violating the indefinite curfew in Salbari sub-division and Anand Bazar area in the afternoon.

This has forced the police to fire in the air to disperse the mob ignoring the curfew at Anand Bazar area.

17 Oct 2012 - 12:48am | Anup Biswas
A joint team of 119 Inf Bn TA and Assam Police conducted an operation near Mahur late evening on 14 Oct 12 and recovered huge quantity of explosives from nearby forested area. Acting on a tip off... 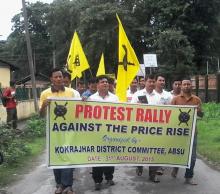 21 Jul 2014 - 10:24am | AT News
Outgoing health and education minister Dr Himanta Biswa Sarma makes it plain and simple that he would continue to oppose Tarun Gogoi as chief minister as long as he stays. Immediately after sending...