In a bizarre incident, an unidentified youth shot dead a school teacher inside a classroom during a teachers' training programme in Karbi Anglong district on Thursday.

The incident took place in Diphu where the gunmen shot dead Sambhu Prasad Singh, a teacher in Diphu Adarsha Hindi School when he was attending a training session at the Basic Training School for TET teachers in the district.

According to police, the gunman visited the school and sought permission to meet Singh, one of the participants in the training programme.

After talking to Singh for about five minutes, the youth fired at him from close range and fled from the scene.

A seriously injured Singh was rushed to a nearby hospital where he was declared brought dead. 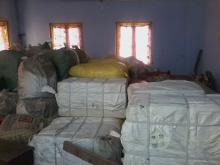 7 May 2015 - 8:48am | AT News
Police heads from 10 states are devising an effective mechanism to efficiently deal with the rising incidents of crimes in the cities at an ongoing convention in Guwahati. Speakers at the 3 days...

7 Feb 2015 - 11:03am | AT News
Ruling BJP is left red faced early in the morning when it Mangolpurie candidate was caught red handed with liquor by a section of local residents.Police has detained him after he was handed over to...