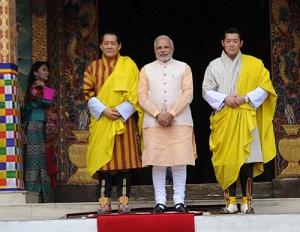 Prime Minister Narendra Modi comes in for sharp criticism in Assam for his alleged permission to Bhutan for construction of a dam that threatens to wash away a huge area in lower Assam.

Various political parties and organizations across the state are taking on the new prime minister alleging that his green signal to the Himalayan kingdom to construct big dams would spell no less disaster in lower Assam.

The Asom Gana Parishad is first to react sharply alleging that Assam is not safe at all at the hands of the new government. Congress leaders told Assam Times that they would examine the issue and would react in appropriate course of time.

Talking to Assam Times, KMSS leaders said that they won’t allow it to happen. But a section of experts said that it won’t be possible for Bhutan to construct the dams in a haste because of some technical reasons.

Notably, during his recent visit to Bhutan, Modi gave green signal to Bhutan to proceed with the move to construct the big dam over the rivers flowing down to Assam.

25 Sep 2010 - 6:07pm | editor
Altogether 19 top ULFAmen who are supposed to have been arrested in Bangladesh before being handed over to Assam police have been brought to Guwahati. According top police sources,these ULFAmen...

17 Oct 2015 - 10:08pm | Siddhartha Handique
The Golaghat police are all set to ensure peace and normalcy during the Durga Puja celebrations. The policemen in the town conducted a mock drill at the Golaghat Sadar Police Station on Friday....