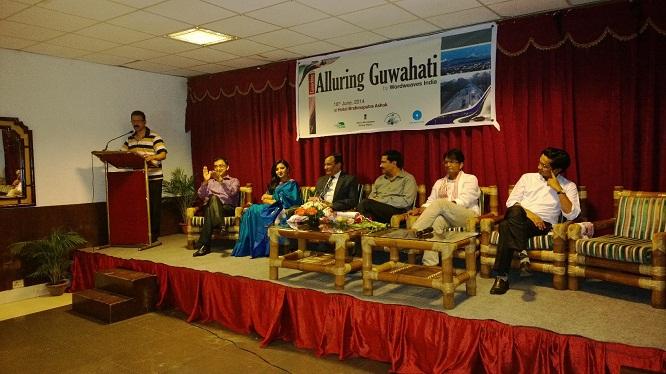 Wordweaves-India today launched 'Alluring Guwahati', a coffee-table pickup that exhibits fascinating aspects of Guwahati. The book unusual to its size documents the various city landmarks, eateries, the emerging night life, necessary information essential for tourists, tidbits and more.
Principal Secretary, Tourism, Government of Assam V.S. Bhaskar after releasing the book said that his department has succeeded in filling the void for a specific book aimed at tourists and others. An initiative of the Kamrup (Metro) District Administration, 'Alluring Guwahati', has been published by Wordweaves India with support from the State Bank of India, Northeast Circle.
Though the book is not a comprehensive edition on Guwahati, it can be used as a ready reference guide by first timers to the city as well as the citizens. For instance the History and Geography section of the book features important monuments with their history in brief. It showcases Guwahati as a haven of birds with famous religious landmarks and lists affordable city eateries including new and not-so-new fine dinning restaurants that dot the downtown area. The book guides where a visitor should look into for souvenirs and ethnic items. It presents a sneak peek into the Assamese way of life and the prevalent music scenario.
Of all it has been able to accommodate a mini yellow page of sorts featuring important phone numbers to help a traveler get around the city. The main texts of the book are by Ritparna Goswami Pande and photography by Anupam Nath. Priced at rupees two hundred and ninety nine 'Alluring Guwahati,' is available at all the leading bookshops in the city.
The launch saw the presence of celebrities, social activities, academics, tourism officials and several others. Speakers included the Kamrup (Metro) Deputy Commissioner Ashutosh Agnihotri, Assam Tourism Development Corporation Managing Director Anurag Singh, Secretary Tourism Government of Assam, Dhrubajyoti Hazarika and actors Kapil Bora and Nishita Goswami.

23 Dec 2014 - 9:55pm | Hantigiri Narzary
At least 4 people were believed to have been killed in yet another dreaded attack by NDFB-S militants in Kokrajhar district on Tuesday minutes after the Serfung guri firing.The incident took place in...