In the morning of April 22nd a truck loaded with cement fell off the bridge along the Barpeta-Kayakuchi-Bhaktardowa-Sarthebari PWD road which links Kayakuchi with Bhaktardowa. The bridge is a means of transport for some fifteen thousand commuters per day. Three months hence, commuters are yet with no alternative.

A bamboo bridge have been constructed in the interim to make do with the situation. Four wheeled vehicular movements are not possible and normal transportation is under stress.

The Public Works Department has shown utmost negligence in its attitude towards the situation. Meanwhile the Barpeta district committee of the All Assam Minority Students' Union (AAMSU) has condemned the Sorukhetri AIUDF legislator, Ali Hussain for his inability to speed up matters. 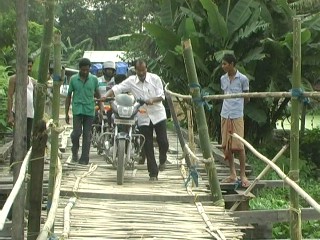 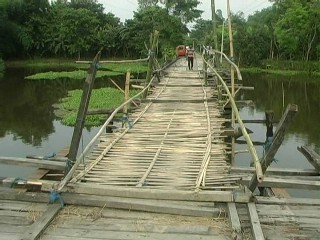 24 Oct 2014 - 8:30pm | SK Hasan
Nazira police have booked a78 year old person for allegedly molesting a minor girl who happens to be his grand daughter. The shocking incident took place at Nazira Khankar gaon on Saturday last where...

12 Aug 2020 - 5:27pm | AT News
Guwahati: A lower court in Guwahati on Wednesday asked Kolkata based intellectual Garga Chatterjee to surrender before it by August 27. The court has issued the order after the court was apprised...