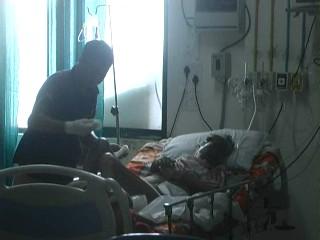 Though the superintendent of FAAMC was informed about the matter, no effective steps were taken.

The Intensive Care Unit is an important department of a hospital where patients requiring critical care are kept under keen observation and treatment. The unlikely happened in the case of Das. FAAMC administrators failed to manage their employees and own responsibilty for the same.

Das had to be shifted to a private hospital in Guwahati city to continue with his treatment. His attendants expressed indignation and said that Himanta Biswa Sarma the Minister of Education and Health, Government of Assam needs to know of the improper functioning of FAAMC and the plight of patients requiring immediate attention and care.

Fakhruddin Ali Ahmed Medical College and Hospital is the newest addition to the emerging medical education scenario in Assam. It is the fifth medical college in Assam built with the aim to specially cater to the needs of people of West Assam.

20 Jul 2015 - 4:05pm | Dibya J Borthakur
In yet another incident that sends sensation across the state, four miscreants gang raped a girl in nagaon district on Sunday night.The gory incident took place Rupohi in the district where the...

19 Jan 2014 - 6:51pm | AT News
A full scale offensive begins in BTAD areas against NDFB-S after the Bodo militant outfit killed 8 persons in three different attacks. The entire strategy was chalked at the unified command meeting...