AirAsia flights in the sky

7 Jun 2015 - 3:18pm | AT News
Will you fly from Guwahati to Impal at a maximum charge of Rs 900? Come June 25. Courtesy AirAsia. The budget  carrier is fully prepared to launch its flight services. The promotional fare... 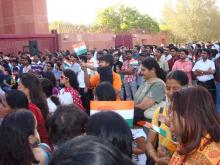