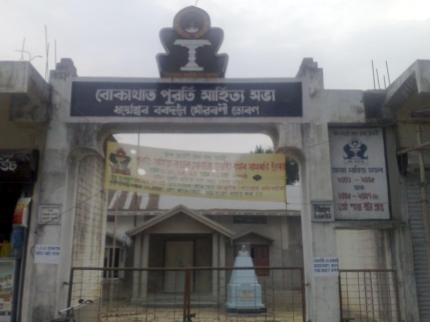 The Golden Jubilee celebration of the Bokakhat Puwati Xahitya Xabha (BPXX) which is scheduled to be held from March 22 started its pandal construction work.

Jiten Gogoi, MLA Bokakhat laid the foundation stone of the main post of the pandal in the premises of the newly constructed SDO's office amidst a huge gathering. Putul Phukan, IPS officer broke the coconut as a part of the ritual programme.

Gogoi in his speech called upon the people to contribute their utmost effort for the grand success of the Xabha. He further said that all the works for the golden jubilee celebration has been taken from the Area development fund. BN Bhuyan, former MLA, R Hazarika, SDO, R Agarwala, BJP president Bokakhat Block, Dilip Saikia, president AGP Bokakhat district committee also attended the programme and assured for the success of the celebration. Badan Sharma highlighted the programme for the jubilee and appealed to the people for their full cooperation which is to held with a four-day-long programme, sources added.

4 May 2018 - 3:22pm | AT News
GUWAHATI: The much-hyped scheme to roll out red carpet to a section of private player to maintain Kaziranga along with three Ahom era monuments triggers no less protest across the state leaving the...